A book like a compilation cassette from a good friend


“There is no difference between music and opium; both create lethargy in different ways. If you want your country to be independent, then ban music.” Ayatollah Khomeini

The Clash, The Cure, Weezer, Soulwax, Nikka Costa, Muff Potter, Judgment Night, the most important soundtrack of all times …
Nilz Bokelberg tells the story of a life based on music: great songs, important albums, but also musical disappointments. He looks back at the milestones that these songs were, analyses lyrics line for line, compiles various best lists, sings hymns to the hymns of Münchner Freiheit, describes the “difficult path to Hip-hop,” answers such questions as: Which pop songs are okay? Can you Karaoke? Which was the best ballad of all time? How did you really get to know the Beatles? And simply just has a lot of fun with good music.
The book is about growing up; the soundtrack to popping pimples; about the happiness of a successful flea market purchase; about the fever of unpacking a new album, the magic of placing the needle on the record and that certain crackling sound you hear; about solitude and taking off; about playing air guitar in front of the mirror and pogoing in the living room. And it is especially about music – because it was always there. And the best thing is that the more personal his stories become, the more the reader finds himself reflected in them.

Touching and personal, sometimes melancholic, sometimes incredibly funny, this is a refreshingly unpretentious book about the most beautiful thing in the world.

It is the soundtrack of a generation: for music junkies and record collectors, earphone and loudspeaker freaks, nerds and finger snappers. 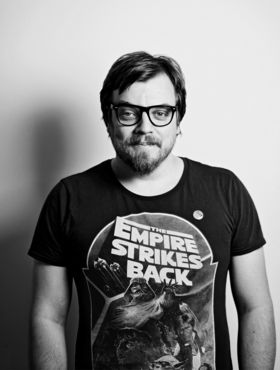 Nilz Bokelberg, born 1976, grew up in a small German city where he already published his own journal at the age of six. (While Das Heft had a “print-run” of only one copy, three editions of it appeared every evening.) At the age of 17 he became one of the first faces at the newly founded VIVA music television station. He discovered the blogosphere while studying theatre direction in Munich and subsequently became one of Germany’s best-known bloggers. Langenscheidt published his book “Ich schmeiß alles hin und werd Prinzessin” in 2010.