ANDREAS SCHÄFER
WIR VIER/
THE FOUR OF US

“Subtle, poetic and full of insight, “The Four of Us” is highquality literary fiction and the agony endured by the characters in the book lives in the reader’s mind. Devoid of sentimentality, this novel skilfully addresses subject matter that is difficult but of universal interest.” new books in german spring 2010

“The book staggers the reader with an almost unbearable intensity, an intensity, however, that comes about entirely by the revocation, the repression of stylistic means as well as a being stingy with all abundance. This thin linguistic artwork comes sparsely shaded, completely purged, precise and trenchant.” Die Welt

“Precise and nevertheless sensitive, Andreas Schäfer stages a ballet of transgressions. “Wir vier” reads as if one was taken gliding: you enjoy the boldness of a language, the smallest particles of which radiate energy, but in the end, you are happy to be back on the ground again. (...) Its virtuosity absorbs the motif of the dead child as completely as if it was swallowed up by a black hole.” Süddeutsche Zeitung

Lothar was a pilot – before it happened. He then began to drink and lost his job. His wife Ruth was a stewardess then; now she helps out at the Samaritan telephone service so that at least other people could feel a little better. Merten is her son; he believes he is the only who knows why his brother was murdered.
There is a large gap in the Wilber family. They do not talk about Jakob and the reason he is no longer there. A ghostly calm dominates.
On the day the murderer was condemned, they light a candle next to Jakob’s photograph and wait for the call to come: life in prison. The parents lie next to each other at night and Ruth asks: “Are you relieved?” – “No.”
Jakob was his father’s favourite son. But what Lothar considered courage was in fact cockiness. It is finally Ruth who takes a step to break the frozen atmosphere.
“Us four” lucidly, sovereignly and movingly tells the story of a trauma and its consequences. The reader cannot get away from it.

Andreas Schäfer was born in Hamburg in 1969, grew up in Frankfurt/Main and now lives with his family in Berlin. He writes reports and theatre reviews for the Berlin Tagesspiegel. He received the 2003 Bremen Literature Advancement Prize for his novel ‘Auf dem Weg nach Messara.’ 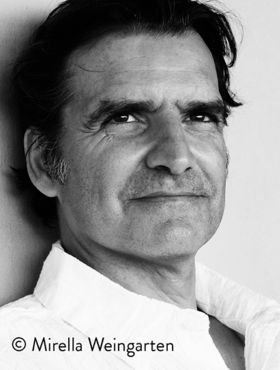