“East Germany is presented here as a living environment and an experience space; its hardships and the necessity of coming to terms with them. Cynybulk has now arrived as an important voice after Uwe Tellkamp’s ‘Der Turm’ and Eugen Ruge’s ‘In Zeiten des abnehmendn Lichts’. His work is also highly personal in the sense that he creates a historical dimension and knows both parts of Germany from his childhood and adolescence.” Rainer Hartmann, Kölner Stadtanzeiger

“I lost track of it when I left East Germany; I could hardly recall anything because I was completely occupied with adapting myself to the new world. At some point after finishing high school I suffered terribly from homesickness and started tiptoeing around this black hole, this nothingness full of material. I entered it five years ago and turned on the light in order to see myself and my people again. And it was good that I met them and could once again walk over the stumbling blocks with them; this time more successfully.” Gunnar Cynybulk

A halved family, a divided country

This family is imbued with history, even though it is only half a family: Grandmother, father, grandson – war and expulsion have disoriented them and driven them apart. But even though they come from the Black Sea, they are drawn to the West during the time of the Cold War, the arms race and the cautious rapprochement. Especially Frank Friedrich dreams of Parisian bridges and freedom. He urges his mother Polina, who as a pensioner in December 1981 is permitted to leave the East, to settle in the West in hope that the family can be reunited there. His 11-year-old son Jakob has other plans; he dreams of a career as an athlete. And then a mishap occurs: Frank falls in love. In Eva. She has a daughter from her first marriage with a high-ranking officer and will never be able to leave the GDR. But it is impossible for Frank to bury his freedom project. In March 1983, three weeks after marrying Eva, he is arrested.
“Das halbe Haus” is a large-scale German-German family novel that intelligently and poignantly talks about people who have to struggle bitterly for their dignity. People break up with each other; countries have to be left behind. Home is longed for but never found. The halved house, the halved country, the halved family: nothing is whole.
Humorously and laconically, Gunnar Cynybulk captures the utmost in emotions: Betrayal, solitude and suffering as well as love and hope. He describes people who envy birds of passage because they can return home. But the act of returning can only succeed in the act of telling. 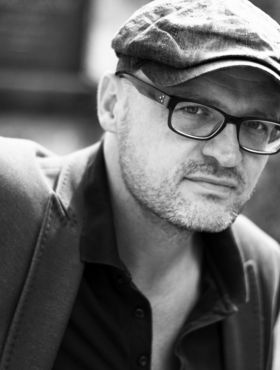