SASCHA MACHT
DER KRIEG IM GARTEN DES KÖNIGS DER TOTEN/ THE WAR IN THE GARDEN OF THE KING OF THE DEATH
A novel, ca.200 pp., Spring 2016

“Young Sascha Macht (born in 1986) has concocted a brilliant mixture of political satire and horror-science fiction - as volatile as a feverish dream, with the same kind of intensity.” Kölnische Rundschau

“Macht’s murderous island set in our ‘real’ world enables a dystopian reality to be played out in tandem with our won societal shortcomings; the relentless narrative intensifies the experience. This concept, combined with a coming-of-age-story involving the potential healing power of low-budget horror movies, is a rich source of humour and an outlet for Macht’s vivid imagination and elegant use of language.”
new books in german, spring 2016

“Any claim that young German authors lack ingenuity can be put to rest by this book alone.” Tilman Strasser, Tagesspiegel

“Here is someone who, with the elegance of a chainsaw specialist, frees wild, wild, anar-chist literature from out of the world’s boughs. Here is someone who freely saws into the realistic, into the symbolic, into the absurd and fantastical, without having to even oil the chain, without recoil, and also without losing his own traction - that is sublime, simply sublime.” Saša Stanisi?

What to do when you are 17 years old and your parents disappear during night without leaving a note? You roll up your shirt sleeves and take care of the final steps of your education yourself – with help of the worst horror movies mankind has seen, given away by the village’s shopkeeper for free.
But Bruno has quite some other problems to deal with: he is not only living in a provincial town, but on a monstrous island which rose from the oceans as result of nuclear tests: A society on its knees, a dreamed of nation of poetry, which is now ruled by pure anarchy. Rebels maraud, NGOs try to supply the local population with food (and video tapes), antelopes graze in the savannah between dumping grounds and a broken Utopia.
Sascha Macht sends his young hero on a journey through this dazzling, boldly dreamed-of world that is built alarmingly close to our real world.
He is telling about growing up, about the long shadows of the great ideologies und the healing power of horror movies: powerful, clever and wildly funny. 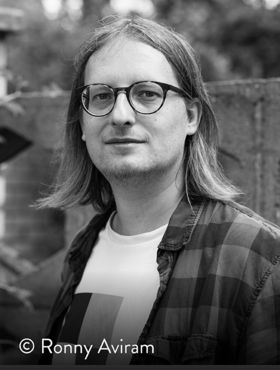 Sascha Macht, was born in 1986 in Frankfurt (Oder) and studied at the German Institute for Literature in Leipzig. He has published works in various anthologies and magazines and was a recipient of the Künstlerhaus Lukas Ahrenshoop scholarship, the LCB Authors’ Workshop scholarship and the German Literature Fund. He was awarded the lit.Cologne Debut Prize for his novel War in the Devil’s Backyard (DuMont 2016). He was also an invited to the comple-tion for the 2016 Ingeborg-Bachmann Prize. Between 2018/2019, he was Writer in Residence for Beeskow. He lives in Leipzig.