„A debut hard to be exceeded (…) A book of superpowers, of superheroines. It comes with a saving grace. (…) This debut could move people like the great confessional texts by Édouard Louis, Annie Ernaux, Daniel Schreiber or Hanya Yanagihara did recently.“
The Jury of the Jürgen Ponto Foundation Literature Prize

"For more than 300 pages, 'Blutbuch' surprises and amazes again and again through the mutability of language, the play with forms and text flows, and above all through the clever and witty narrative style, which in the end arranges all the seemingly contradictory building blocks into one big, impressive And." Judith Hoffmann, Ö1 KULTUR AKTUELL

"Gender stereotypes? This debut simply leaves them completely behind. [...] It's a virtuoso journey you embark on, accompanied by sentences with which de l'Horizon conjures up a universe of her own and has left me with a lasting impression."
Imke Weiter, EMOTION

„A book as if written on a matryoshka: Again and again a narrative layer falls away, is viewed from all sides and unearths the next, and for each Kim de l'Horizon finds its own tone.“ Elena Witzeck, FRANKFURTER ALLGEMEINE ZEITUNG

"Especially the approach to the grandmother, who suffers from dementia, is one of the most gentle and tender things Swiss literature has to offer. [...] A remarkably dense and profound first novel!" Julian Schütt, TAGBLATT

"Such a deep story with dreamlike language. I am completely enthralled."
Jessica Bradley, FRANKFURTER RUNDSCHAU

„It is a tender, thoughtful book in the first part. A cleverly researching book in the middle part.And a fantastic book in the last!"
Bettina Steiner, DIE PRESSE

“This is writing as an existential obsession. Blutbuch employs tremendous power to tell a story about growing up in a small provincial family, adult life in Zurich, vain attempts at liberation and successful emancipation, about the desire for belonging, the search for identity,
and denying one’s whole identity, about passion and shame— in short, the multifaceted legacy that the narrator carries within themselves.”
Ruth Schweikert

The first literary and cultural work to take on the topic of genderfluid identity/transgenderism: clever, painful, tender, melancholic, exuberant

The book’s unnamed protagonist, who feels neither male nor female, is prompted by their grandmother’s slide into dementia to investigate their family history. The more their grandmother forgets, the more the narrator tries to remember: what was it in their childhood that prompted them to feel so alienated from their body? Does it have something to do with the family’s hushed-up history of incest? Why is their grandmother struggling to differentiate between herself and her sister who died young? And what happened to their youngest great aunt who disappeared when she was young?
Tracking down answers to these questions proves difficult because the family has a habit of keeping quiet about such matters. At the heart of it all is the question of self-determination: how to exist when your own body is never a given, but is instead constantly having to be negotiated?
Singular in its style and form, Bloodbook deals with our intangible heritage, the things we carry without being asked: stories, genders, identities, trauma, languages, class affiliations. Kim de l’Horizon searches for other kinds of knowledge and traditions, other stories and ways of becoming: feminist, witchy, bought with blood, and those that leave a hole in their wake. De l’Horizon leaves the linear, monotonous form of family stories behind and opts for a fluid, streaming form of writing which softens instead of pinning down. 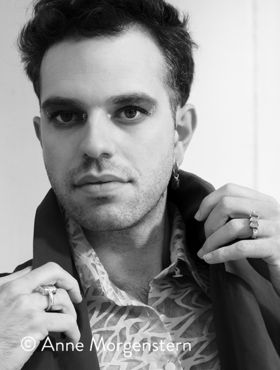 Kim de l’Horizon, born in 1992 in Switzerland, studied German, film and theatre studies in Zurich and literary writing in Biel. They are currently completing a Master’s in Transdisciplinarism at ZHkD. They are a member of the e0b0ff collective and the editorial board of the literary magazine delirium. For the 21/22 season, they are author in residence at Bern City Theatre. Kim has won the Jürgen Ponto Foundation Literature Prize in 2022 for the debut BLUTBUCH which is also shortlisted for the German Book Prize 2022. Kim de l’Horizon previously has been awarded numerous prizes more including the Treibhaus & OpenNet competitions in conjunction with the Solothurner Literaturtage for Prose, and has been published in various literary magazines. They are a beneficiary of the Ernst-Göhner Foundation Fund for artists in education.