Portrait of a family – told with great precision and intensity.

Marius Hulpe creates a wide narrative arc, between Iran and Germany, from the sixties to the noughties of the following century. A powerful literary debut.

Iran, early 1960ies: young Reza is sent to Germany as a spy for the Shah regime. His mission: to make a life for him-self, to study and, in the process, accumulate as much knowledge about the West as possible. After being side-tracked a few times, he ends up in strictly catholic, conservative Westphalia. Reza is stumbling in this
foreign country. Just like Clara who is at home here but couldn’t feel more alienated. They find each other in their love of freedom and their longing for self-determination - at the same time those remain the centrifugal forces that almost hinder a harmoni-ous relationship. Not even the birth of their son Niklas will make any difference.
When the Green Revolution turns Reza into an enemy of state in his own country from one day to the next, he breaks down. His only hope is now his family, a family whose hopes he never managed to fulfil himself.
In ‘Wild Green City’ Maris Hulpe unveils what family life in our society can mean to-day. He explores the distortions in our societies and shows, how alienation, ideology and repression, but excessive liberal values, too, can create a labyrinth without an exit. A strong storyteller and a highly intelligent debut. A novel of our time. 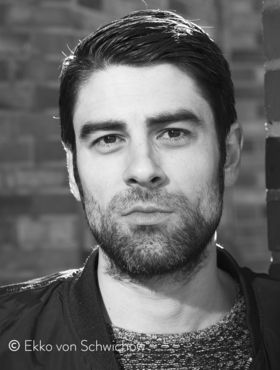 Marius Hulpe. born in 1982 in Soest, studied philosophy, literature and theatre and media in Leipzig, Potsdam and Berlin, and creative writing and cultural journalism in Hildesheim. In 2008, his first poetry collection, ‘Wiederbelebung der Lämmer’ (Revival of the Lambs) was pub-lished by Amman, Zurich. His poems, essays and short stories are published in numerous magazines, newspapers and anthologies, as well as broadcast on radio programs. Two further poetry collections, ‘Einmal werden wir’ (Once we will…), Lyrikedition 2000, 2013, and ‘Süße elektrische Nacht’ (Sweet Electric Night), Edition Haus Nottbeck, 2014. ‘Wild Green City’ is Marius Hulpe’s first novel. He lives in Berlin.