"In delicate and confident language, Verena Güntner layers levels on levels, dismantles gender attributions, and keeps away from clichés. And shows what a narrative pull the search for a missing pet can develop."
Jury of the Leipzig Book Fair Prize

“Power is a deceptively simple symbolic tale – a universal story that will strike a chord with readers everywhere.” New Books in German

„Power is a fascinating parable on the present: absurd, fairy-tale like and radical. A great social novel about power and iniquity - and a declaration of war: Things cannot go on as they are.“ - Jan Brandt

“Verena Günter tells in Power dazzling and cool about transformations and the power of determination.” Judith von Sternburg, Frankfurter Rundschau

“One sees how the brutality of a state in which man is a dog to man and the brutality of isolation in civilization are intertwined. Seen in this way, this novel, which has the tone and appearance of a simple children's story, becomes an existential drama in which the rescue of humanity fails once again." Marie Schmidt, Süddeutsche Zeitung

A village community, a missing dog, and a quest that transforms

Self-confident Kerze is just still a child. She lives in a small village, surrounded by woods and fields, with merely 200 inhabitants. The older generation, to which her neighbour Hitschke be-longs, builds the majority. Kerze defends her village against decline, she is firmly rooted here. One day Power, Hitschke’s dog, goes missing, and Kerze promises to find him. A rousing, mer-ciless search begins and ever more
children are joining in. When finally all children disappear in the woods, the village community declares the state of emergency.
With remarkable eloquence, wit and tremendous empathy Verena Güntner tells the story of a radicalization and what it means when a community loses contact with their children. Power leads us into the pain of those who are left behind, and shows with enormous force what it takes to persevere, to keep going and to find meaning in a world turned unstable. Power is one of the most unusual books of the last years. A text that will grip and engage you.


"This novel tells in detail about the baser instincts in man, about the attraction of the radical. But in the end it is a not so old-fashioned enlightenment value that stops the madness: truth. The truth about power." Jonas Bickelmann, Der Tagesspiegel

“What starts out as an unusual children's book quickly becomes a parable about the state of our society. (...) Power is an unusual novel that breaks with reader expectations and therefore has a long lasting effect.” Anne Burgmer, Kölner Stadtanzeiger

„It is an impressively monstrous and daring book.“ Verena Auffermann, Deutschlandfunk Kultur

“Between Enid Blyton, Lord of the Flies and horror stories: Verena Güntner has wrapped up in painfully accurate words how far away people have become from the nature that surrounds them and from their children, who no longer understand them - and perhaps never have under-stood them." Elisa von Hof, Der Spiegel

"Above all this, Güntner's language lies like a poetic veil that does not conceal anything, but sometimes contours things more clearly, colours them or makes them shine.“ Tilman Spreckelsen, Frankfurter Allgemeine Zeitung 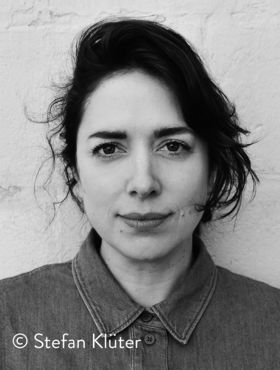 Verena Güntner, born in 1978 in Ulm, after finishing drama school she spent sev-eral years on stage at different theatres. Her debut novel Es bringen (2014) was adapted for the stage and has won the German Audiobook Price (Deutscher Hör-buchpreis). Verena Güntner was awarded several prices, amongst others the Kelag-Price at the Bachmann-Competition and the Berlin Senat scholarship. She lives in Berlin.