A headstrong woman, an exciting life and a whole century of German history

Based on real events: Emmy was the author’s grandmother

“When the world is falling down around my ears, I just move on somewhere else.”

Emmy’s life spans almost a whole century. Her childhood on a little island in the North Sea is shaped by the tides and by her embittered grandmother Alma, who thinks compulsory schooling is a load of nonsense. And with the outbreak of the First World War, Emmy’s school career is cut short before it has even really begun. The only option left open to her is the life of a servant in Berlin, the ‘madhouse of the 1920s’. She soon meets Hauke, a young man from a wealthy family. The ‘stuck-up twit’ shows her another side to life, and a few other things besides. Then come three children, and the hard years of the Second World War. But even in the tough-est of times, Emmy never loses her sense of humour. It’s still going strong at the ripe old age of eighty-six. Until her grown-up children stumble across a mysterious folder in the cellar and begin to suspect that Emmy may never have been the naïve little girl from the island that everyone has always taken her for. Could Emmy be sitting on a fortune? The two eldest are all ready to crack open the champagne. But Emmy still has a word or two to say on the subject… 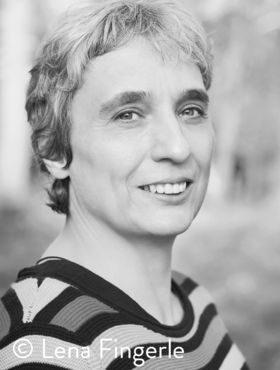 Manuela Golz, born in 1965, has a degree in German, education studies and psychology. She lives in Berlin and has worked as a psychotherapist for over 20 years. In 2006 she made her debut as an author with Ferien bei den Hottentotten. Her new novel Sturmvögel is inspired by the life of her grandmother Emmy.