“A very good, but very nasty novel. (...) It is astonishing that just as we were starting to believe that pop literature had vanished or become irrelevant, this work appears and takes it onto a new level of critical rele-vance.” Jan Wiele, Frankfurter Allgemeine Zeitung

“A brilliant, nasty novel about the world of ecological marketing. ‘Greenwash Inc.’ is a brilliantly written satire in the tradition of Bret Easton Ellis. American Psycho without the violence.” Joachim Scholl, Deutschlandradio Kultur

“Author Karl Wolfgang Flender’s description of the advertising business hits the bullseye. His novel ‘Greenwash Inc.’ is palatable, but then it sticks in your throat.” Pascal Fischer, NDR Kultur

“Nasty, very, very nasty.” This impression becomes irresistibly clear after just a few pages. Also just the fact that there is someone here sticking their finger into a festering wound and twisting it brutally (…) Lustfully destructive. Flender mounts an attack on a whole area of business. A form of disassembly. An unusually good debut.” Emmanuel von Stein, Kölner Stadtanzeiger

You’ve got a company with a difficult portfolio? Genetically modified maize? Production in asian sweat shops? No problem, Mars & Jungs will take care of this. The agency offers integral support, from viral image campaigns to the invention of fair-trade certificates to on-site crisis management. In case there’s a fire somewhere. In a textile factory for instance. Which has no escape routes.
Thomas Hessler is at home in this greenwash-world. And he is equipped with the perfect qualitities to make a career in this world: creativity, empathy, self-sacrifice – and unscrupulousness. For PR-stories he travels to Brazil, India or Ghana and has the killer instinct for the success of his projects.
He delivers what is expected: The lies we all want to hear. Until he falls victim to his own ambitions.
With painful precision Karl Wolfgang Flender’s debut is telling the story of a steep career – and of a rapid decline in character. 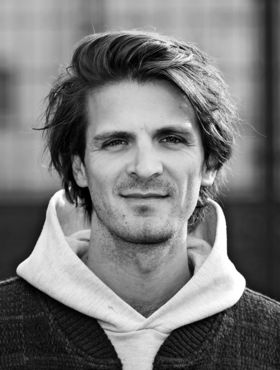