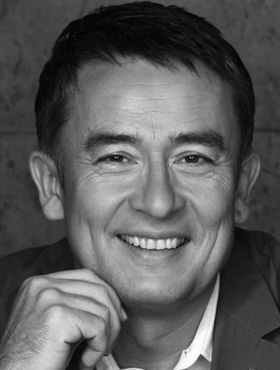 Gert Scobel, born in Aachen in 1959, studied philosophy and Catholic theology at the Jesuit St. Georgen College in Frankfurt am Main and the University of California at Berkeley as well as the philosophies of science and language in Frankfurt am Main. He twice received the EICOS Stipend, including at the Max Planck Institute for Human Cognitive and Brain Sciences Department of Psychology in Munich. After working as a freelancer for newspapers and radio as well as making documentaries was one of the presenters of the daily 3sat Kulturzeit television programme from 1995 to 2007. He hosted the ARD Morgenmagazin from 2001 to 2003. Since 2004 he has also presented the programme delta, also on 3sat, and the program scobel since April 2008. He received the Adolf Grimme Prize in 2005 for his presentation of Kulturzeit and delta, and, in the same year, mediummagazin named him “cultural journalist of the year.”